The objective of Research Training Group (Graduiertenkolleg) 1161 was to open new ways for the education of graduate students along the innovative topic of printable electronics. The scientific challenge was the demonstration of simple electronic circuits from printable nanoparticulate pastes. The advantages of flexible production of polymers was thus combined with the advantages of silicon technology. This approach was expected to open new applications in the field of low price flexible electronics, e.g. integrated circuits for consumer products, radio frequency tags or flexible and transparent coatings for displays.

The teaching addressed disperse systems for electronics in cooperation with the company Evonik (formerly DEGUSSA). From the very beginning innovative tools for project management were integrated. Each PhD student was supervised by two interdisciplinary groups from the university as well as by an expert from Evonik. The curriculum included lectures exclusively designed for the research training group, which were held by the involved professors and project partners from Evonik.

Furthermore, a variety of special courses were available which covered all technical aspects as well as courses on project management and economics. These were complemented by seminars, summer schools and lectures given by researchers from abroad. The doctoral researchers could spend up to three months at the Science to Business Center Nanotronics of Evonik. In addition, researchers were able to spend a few weeks to a laboratory abroad. 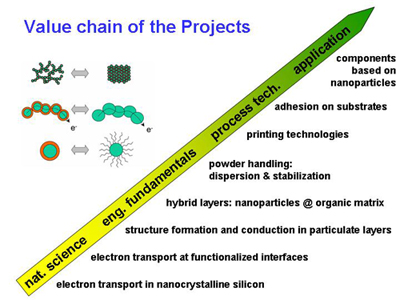 The research training group was organized along the knowledge chain of printable electronics.

Particle interactions are central to almost all mechanical process engineering applications and many adjacent fields. Despite this importance, many basic physico-chemical issues of interparticle forces are poorly understood. The predictive calculation of contact forces and in particular of friction is possible only in individual cases. Especially for the contact area and very small particle distances below 50 nm many fundamental questions are open. These include aspects of inelastic deformation, the role of surface functionalities and adsorbate layers, effects of particle loading, the impact of loading velocity and time on the normal and cross-surface transferred forces. In order to improve the understanding of these important influencing factors, targeted experiments are needed that systematically investigate adhesion and friction forces depending on material properties, particle size, roughness, deformation rate, physical and chemical surface properties, elucidate key mechanisms and provide data for a physically based modeling of the processes. For this purpose, it is planned to use SEM- and TEM-based mechanical micro- and nanomanipulation, static and dynamic force-distance spectrometry with scanning probe methods for force measurements as well as interfacial-sensitive nonlinear optical spectroscopy (SFG). As model-theoretical approaches, the continuum mechanical FEM simulation of deformation will be combined with methods of molecular simulation and further developed.

In the process of superheated atomization the fluid which is to be disintegrated is heated up above the evaporation temperature in respect to the ambient. Accordingly, another energy component (heat) is given for the fluid disintegration in addition to the usual pressure energy. With this process it is possible to generate sprays with varying size distributions in dependence of the nozzle geometry, process conditions and the properties of the applied fluid. In comparison to subcooled spraying additional effects like local evaporation of fluid inside the nozzle or the enhancement of fluid flow due to a viscosity reduction with temperature have to be taken into account. In the proposed project the dependency of the product properties on process and material properties will be analyzed and described by dimensionless quantities. The focus of the applied project is set on the investigation of the atomization behavior of rheologically complex fluids and the synthesis of particles with these substances. The direction of the driving temperature difference can be set by varying the ambient temperature which has significant influence on the morphology of the generated particles. The temperature of the ambient will be set specifically in order to analyze the impact of this parameter on the produced particles. For the planned investigations Polyvinylpyrrolidone (PVP) solutions, suspensions (for example glass pearls with water), mixtures of both and solutions of Mannitol will be used. The solubility of those substances increases with temperature. Accordingly higher concentrations (higher supersaturation) in comparison to subcooled spraying can be atomized yielding finely crystallized particles. The synthesized particles will be analyzed regarding size distribution and morphology. Since for higher viscous fluids (like PVP solutions) the droplet size is enhanced hollow cone nozzles will be used in order to generate fine droplets even for higher viscous media. The medium size of the water droplets is smaller for droplets generated by hollow cone nozzles in comparison to those made with a cylindrical nozzle which have been applied thus far; hence the same can be expected for PVP-solutions (viscosity up to 514 mPas at 25°C). In a counter pressure chamber with an optical access the behavior of the atomization versus a higher counter pressure will be investigated. In the SPP 1423 different spraying processes are applied (effervescent atomization, atomization by dissolution of CO2, atomization with external mixing nozzles). These processes will be compared in respect to their effectiveness and differences will be discussed. 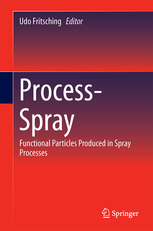 Subject of this research project are experimental and theoretical investigations on particle formation and handling of nanoparticles (<20 nm) in non-aqueous systems using the example of ZnO and PbS. Due to their electro-optical properties, these are interesting candidates for industrial applications in solar cells, in catalysis, in LEDs or in telecommunications. While the focus of the first funding period was mainly on the particle synthesis, the oriented aggregation into anisotropic structures will be investigated in depth over the next two years. In particular, the results obtained during the first funding period on ZnO indicate that that later structures are already predetermined before the synthesis by the precursor compounds used. In this case, the classical theory of particle formation based on nucleation and growth is no longer suitable for accurately reproducing the mechanisms that are taking place. Since lead sulfide is also formed via a precursor compound, both material systems, ZnO and PbS, should be investigated in parallel in order to find differences and similarities. In the first funding period, the ripening behavior has already been extensively investigated experimentally and numerically. Now, through the in-depth use of modern scattering techniques (Hyper-Rayleigh scattering, small angle scattering) and supplementary numerical studies (population balances, Brownian simulation) alternative models for the description of nucleation, growth and aggregation are to be developed. These should make it possible to make statements about the later particle structure already in the investigation of early cluster stages. In addition, the influence of surface modifications, eg by stabilizers, should be systematically considered in the developed models. 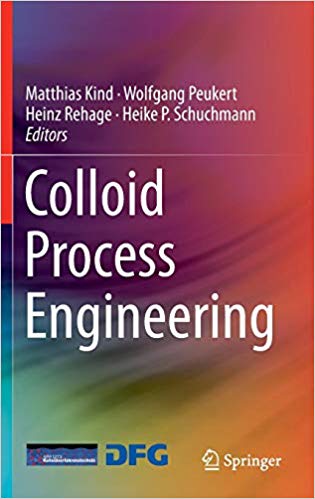 The economic production of particulate products with exactly pre-defined characteristics is of enormous relevance. Although there are different particle formation routes they may all be described by one class of equations. Therefore, simulation of such processes comprises solution of nonlinear, hyperbolic integro-partial differential equations. This project aims to study this class of equations in order to develop efficient tools for the inverse solution, i.e. determining the optimal process conditions and reactor geometry to achieve a desired product property. This objective is approached by a joint effort of the mathematics and the engineering faculty. Two model-processes are chosen for this study, namely a precipitation process and a highly innovative aerosol process with a nozzle flow allowing for precise control of residence time and temperature and therefore promising to deliver products with unique properties. Since the overall problem is far too complex to be solved in one step a hierarchical sequence of simplified problems has been derived which will be solved consecutively. Model reduction as well as highly innovative mathematical methods (e.g. domain decomposition, second-order optimal-control methods, SQP method) shall be used which have not been applied to similar problems so far. Finally, the simulations will be subject to comparison with experiments.

The goal is the predictive prediction of adsorption equilibria on heterogeneous surfaces. Based on the preliminary work, the adsorption equilibrium should be calculated as much as possible from pure substance data of adsorbent and substrate. The influence of structural and chemical heterogeneities on the adsorption equilibrium should be systematically investigated. In addition to van der Waal’s potentials, electrostatic interaction terms in off-lattice Monte Carlo simulations for adsorption from the gas phase in the large-canon ensemble will be included. On the other hand, the previously promising continuum approaches (COSMO-RS) for the adsorption in gas and liquid phase should be further developed. In a continuum, shielding charges are derived from electronic DFT calculations, whose distribution can be used to calculate phase equilibria. The COSMO statistic developed for fluid systems has to be modified for adsorption on surfaces, which will evaluate the planned DFT-COSMO calculations for model surfaces. In order to treat extended surfaces, periodic boundary conditions will be applied. The influence of heterogeneities shall be studied by comparing results on ideal model surfaces and modified or real surfaces.

The subject of this research project is micromixing in jet mixers in connection with nanoparticle precipitation. The mixing kinetics decisively influences the structure of the supersaturation and thus the strongly nonlinear particle formation kinetics. T / Y mixers have proven to be particularly suitable in our own preliminary work as well as in industrial applications, since rapid mixing kinetics can be achieved in such aggregates. First, the mixing kinetics will be quantitatively characterized in comparison to the particle formation kinetics. The mixed kinetics are measured on the one hand globally with the method of parallel reactions and on the other hand locally with high-resolution LIF measurements on length scales below the Batchelor lengths. These measurements will also be provided to cooperation partners for modeling. The influence of micromixing on the particle formation kinetics is to be studied by own model calculations. For mixing intensification external fields are proposed. In addition to electric fields, magnetic fields and, above all, the use of ultrasound come into question. The relative importance of each method will be examined quantitatively within the framework of the priority program. With regard to product design, it is crucial to “tailor” the supersaturation distribution in the reaction volume and to achieve the mixture by judicial choice of operating parameters and the reactor geometry so that the chosen educt concentrations lead to the desired particle size distribution.